PENILE ERECTION AND TREATMENT OF ED 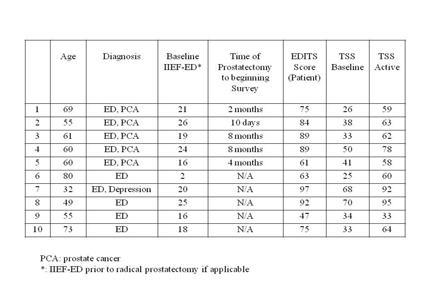 VIBERECT® DEVICE USE BY MEN WITH ERECTILE DYSFUNCTION: SAFETY, EASE OF USE, TOLERABILITY, AND SATISFACTION SURVEY

Introduction: Penile erection is a nerve generated vascular and mechanical event. Genital afferents activate spinal nuclei and higher centers responsible for sexual and urinary function. Viberect® is a new FDA−cleared medical device indicated to provoke erection and to treat anejaculation in spinal cord injured men. We report a preliminary survey of Viberect® use by men with erectile dysfunction (ED).

Patients and Methods: A representative sample of urology patients with ED (N = 10) were recruited (Table 1). Men were instructed by a unique repetitive reflex teaching program for optimal Viberect® experience. Viberect® stimulation was performed at home for 5−10 minutes at 70−110 Hz at least 3 times a week for one month. Treatment satisfaction was assessed by Erectile Dysfunction Inventory of Treatment Satisfaction (EDITS) and Treatment Satisfaction Scale (TSS).

Results: All men completed the surveys. No complaints or adverse events were reported. Viberect® was easy to use, painless, and acceptable. 90% were satisfied with the Viberect®treatment (EDITS Index >50); mean EDITS index score was 77. Mean TSS score was increased significantly from baseline (41.8) to active (66.8) (p< 0.01). 90% would continue Viberect® treatment and recommend its use to their friends.

Conclusion: This preliminary survey suggests Viberect® use by men with ED is a safe, convenient, well−tolerated, and highly satisfying modality for treatment of ED. Randomized prospective trials are necessary to authenticate these important findings.

Methods: Sixty-eight patients with ED underwent Viberect® stimulation prior to penile CDDU. Viberect® stimulation (simultaneous dorsal/ventral glans/corona and proximal shaft) was performed by the patient at 70 Hz frequency and amplitude of 2 mm for 6 minutes followed by immediate evaluation by CDDU as per Doppler ultrasound protocol. After flaccidity was attained, ICI using 7-15 mcg PGE1was administered and CDDU repeated.

Fifteen patients were unable to complete Viberect® stimulation due to impending ejaculation. No complaints of pain, priapism or other adverse events were reported with Viberect®.

Conclusions: Viberect® induces similar blood flow and erection responses as by ICI in the majority of patients undergoing CDDU evaluation. Stimulating the bulbocavernosus reflex with Viberect® is a safe, convenient, and well-tolerated modality for CDDU. Randomized prospective multicenter trials are needed to further validate these results and to assess the role of Viberect® during ED diagnosis.

The limitations of intracavernosal injection (ICI) of vaso-active drugs as a diagnostic tool in the evaluation of erectile dysfunction are well recognized and, prominently, include the artifacts induced by the unfamiliar environment on the patient. We report on the benefits of adding a vibratory stimulus to ICI to improve the sensitivity of this test in a population of 170 patients with erectile dysfunction who were evaluated using a standard protocol. Intracavernosal pressure was measured following ICI alone and ICI with vibratory stimulation of the penis. A statistically significant improvement in intracavernosal pressure (ICP) with the addition of vibration was observed in 87% of the subjects as compared to ICI. In 52% the improvement in ICP was greater than 20% over that achieved by ICI. This study showed that the addition of vibration to intracavernosal administration of vaso-active drugs significantly increases the erectile response in a controlled and reproducible manner. Vibratory stimulation provides a better reflection of erectile potential than the pharmacological challenge alone.

Current strategies employed to treat erectile dysfunction (ED) all target the vascular component of erections to achieve improved tumescence and rigidity for sexual intercourse. A new, FDA-approved treatment for ED, which exploits vibratory stimulation of genital afferent nerves as means of provoking erections, the Viberect® device, has not been rigorously assessed in clinical studies. The objective of this study was to objectively assess the efficacy of the Viberect® device to provoke erections in healthy men with no ED.

Six healthy subjects with normal erectile function as measured by responses to the IIEF-EF questionnaire were studied. The Erection Hardness Score (EHS) was used for subjective assessment of maximally rigid erection. Subjects were instructed on a penile stretching exercise meant to stimulate the bulbocavernosus reflex to achieve reflex erection. The Rigiscan device, set to the provocative ambulatory mode, was applied to the penis, and the Viberect® treatment initiated without any external visual sexual stimulation (VSS). Rigiscan measures of rigidity were recorded, as were adverse effects.

Subjective assessments of erectile rigidity using the EHS for both the BCR stretching exercise as well as the Viberect® treatment did demonstrate a notable erectile response. 5/6 patients scored their maximal erection with the Viberect® device at 4/4 without the use of any visual sexual stimulation. Objective assessment with the Rigiscan did demonstrate the ability of the Viberect® to stimulate an erectile response, with a mean increase in penile basal girth of 2.3 cm, mean tumescence percentage above baseline of 24.5% and an average time of the tumescence episode beyond 55% total rigidity of 15%. There were no reported adverse effects, and all subjects felt that the Viberect® would be a reasonable, practical treatment for ED.

METHODS:
During April 2008, data were collected from a population-based cross-sectional survey of 1,047 men aged 18-60 years in the United States. Analyses were conducted using post-stratification data weights.